Worms and Weather: Further complications in the journey of mushroom identification 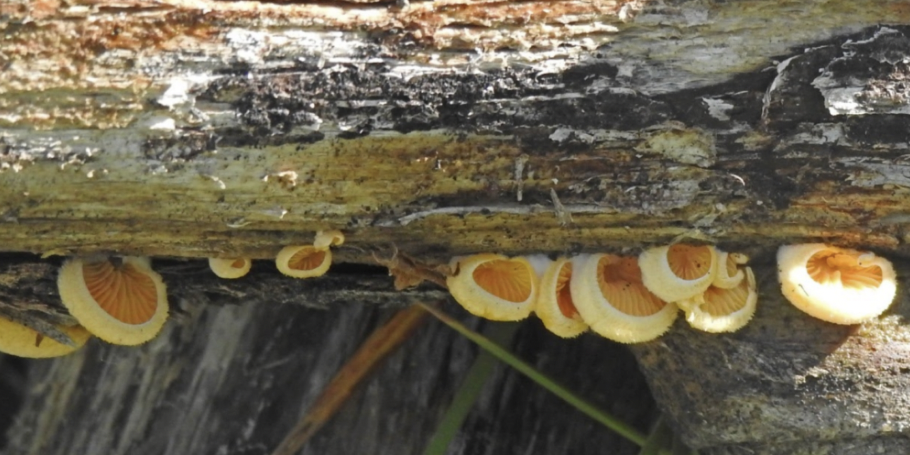 Hello again and welcome! Thank you for continuing to join me in my journey as a beginner mushroom forager who hasn’t foraged anything yet (and probably won’t this year).

I have loved how mushroom foraging has made me more aware of the weather than ever; mushrooms need rain. It was only toward the end of August that we saw something that would allow for any mushroom growth, for a monthly total of 39 mm. Edmonton’s “average summer rainfall is 223 mm. This year, we had just 86 mm. That’s the driest summer on record.” I have always loved the rain, so I am very aware when it is lacking or in abundance, but taking note of rainfall’s impact on mushroom growth makes a person appreciate water falling from the sky on a whole new level. It makes me feel for the farmers this year, who keep turning up dry harvests. Colonial society involves such little connection with the land unless you have reason to work directly with it for its utility, and I appreciate this opportunity to develop a more intimate awareness and relationship with the land I am a guest on (amiskwacîwâskahikan/Beaver Hills House).

A reminder this month: don’t forget to check for bugs!!!

The story of the wriggling worms

As I was walking through my neighbourhood I came across an excavated mushroom; looks like I’m not the only person in my neighbourhood who is fascinated by our decomposer friends. I had taken a different route than usual, so it was as if it were meant to be. I decided to grab it and take it home in an attempt to ID it.

There are a few important things to keep in mind when picking mushrooms, even if you have positively ID’d it:

1) Don’t forage in polluted areas, such as areas with lots of garbage, areas next to major highways (car exhaust and road dust), near water treatment centres, etc. Be mindful of the way human activity is influencing this area.

2) Don’t eat mushrooms that are either too young or too old. You can tell that they may be too young by seeing if they have a veil or not (a sort of net-like structure that keeps the mushroom rising out of the ground in its earlier stages, found attached to the cap and enveloping the stalk). Though this isn’t a steadfast way of determining age since some mushrooms keep parts of their veil even when mature (Amanita spcies), and some never form veils (Clitocybe species). The more you get to know your mushrooms, the better you will become at seeing what stage of development they are at. They are harder to ID in these stages and may be past their best before date (or, conversely, “unripe like a fruit). As Martin Osis from the AMS says, “pick what you would buy from a grocery store.”

3) Take note of any bug or worm infestations by looking for tunnels or boring holes in the stems and caps. If it’s been infested, don’t eat it. Better safe than sorry.

I’d been thinking about age and pollution this whole time but forgot about bugs. Sometimes life has a way of reminding you.

After taking this mushroom home to ID it and take a spore print, I sliced it in half lengthwise and looked at its margin (the area just at the very outer edge of the cap). Margins are an important trait for ID’ing. First, you observe the area to see if it is smooth, lobed in some way, whether smoothly or in a jagged way, has splits in it, has hairs, or any number of things to look out for. Take note of this. Cutting through it lengthwise (so you get a profile view of the margin) allows you to look at its “curvature.”

It’s also important to note that as mushrooms get older, and especially in a dry climate, their margins may start to crack and split deep into their caps (so I would assume). So a cap with cracks could just be because it’s too old, and this is another reason NOT to eat mushrooms unless they are at their best age. You can test how dry the mushroom is by feeling it. If it feels

light and stiff and brittle, it may be very dry, but it could also be a Russula species. The more you do this, the more you recognize these details.

As I was making note of all these features, I looked at the stalk, then did a double-take, because I saw movement. White, wriggling movement. I stared at it for a while in fascination and disgust. It’s good that we naturally feel disgusted about these things because it means the mushroom is past its best! Scroll past this next image if you have any bug phobias.

Iosegun Lake: Lichens are not fungus

This grey “mushroom” pictured on the left is a lichen. Lichens CAN be mistaken for mushrooms by novices like me since they are a symbiosis (cooperation) of fungi and algae. (This was found at Iosegun Lake). It is important to learn as much as you can about the things you intend to eat; learning more about fungus and lichens is a good idea if you want to learn to better distinguish between the two.

The mushroom pictured on the right was found at Bruderheim Natural Area. You can see little stems (stalks) attaching it to the surface of this dead log. Lichens don’t have stalks, and they don’t have such big fruiting bodies (they don’t have fruiting bodies at all, actually). This is most likely the inedible Phyllotopsis nidulans, aka. mock orange oyster mushroom.

Seek the advice of others who know more than you do; they may tell you that what you are trying to identify is a lot harder to tell than you thought. But as it always goes, “when in doubt, throw it out.”

Upcoming: The game-changing adventures at GAMF, the Great Alberta Mushroom Foray, which is a weekend-long convention for mycophiles!