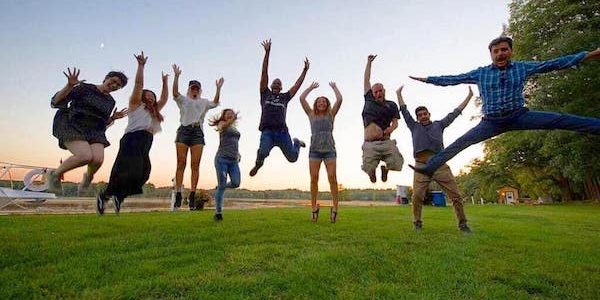 2020 has been one of the most challenging years with the greatest focus in the media being directed to the global public health crisis, which left little room to discuss water related news. With life constantly changing due to public health guidelines, it can make it hard to appreciate all the positive achievements that were accomplished this year. Today’s blog will be an overview of eight water achievements that occurred in 2020 which spans over science discoveries, water governance successes, water technology developments, and more!

In 2016 the African Development Bank evaluated its assistance in the African Water sector. The main focus of this venture was to improve Water Supply and Sanitation (WSS) and evaluate their impact [16]. This goal would extend to providing water to those in rural and urban areas without access to water, and improving water management in the agriculture sector [17]. Since 2005, the African Development Bank has been involved in water sector intervention and development [16].

After reviewing reports from the projects that were completed between 2005 – 2016, the African Development Bank has concluded that over 20 million Africans from Mozambique to Morocco have gained access to clean drinking water [16]. This milestone has been completed through 400 operations across Africa, which costed $8.2 billion[16].

These projects have seen great success in improving sanitation, which is incredibly important in mitigating the spread of illness. In addition, the improved agricultural water distribution has helped communities minimize the impacts of food insecurity during COVID [16]. The major takeaways from these projects was the identification of all the current barriers in improving the water sector like poor service delivery, insufficient human capacity, and  limited financing [16]. This will help accelerate the future transformation of Africa’s agriculture and public health sector as 2.2 billion people are still without access to safe clean water [16].

Some of these projects include:

You can find out more about these projects HERE!

This project is also important  because the Canadian government has  committed to protect freshwater resources for Canadians. These projects will engage communities who live around the Great Lakes Basin, promote local initiatives, increase innovations, and expand the number of jobs in the conservation and water sector [20]. In the coming year, the government will also be consulting with provinces, territories, Indigenous communities, local authorities, and scientists on the creation of the Canada Water Agency which will help guide water management in Canada  [20].

In the last 30 years scientists have recorded that 50% of the Earth’s coral reefs have died and these events will continue into the next century [1]. Coral reef damage is a result of a combination  of climate change, pollution, unsustainable fishing practices, and ocean acidification [1]. Coral reefs are key players in ocean ecosystems, providing shelter to many different aquatic species [1]. Reefs protect coastlines during storms and reduce coastal erosion [2]. In addition, many communities rely on coral reefs as a source of local economy, whether it’s a tourism attraction, foraging for medicinal aquatic plants, or small scale fishing [2]. Overall coral reefs provide enormous economic and social value each year [2].

Scientists around the world are trying to combat this global event through research. In Costa Rica researchers are trying to revive the ancient coral reef, Golfo Dulce [3]. This reef is relatively unstudied compared to the more famous reefs in Australia and in the Caribbean [3]. The reefs in Golfo Dulce differ from other reefs due to the conditions they are found in, which experiences fluctuations in temperature, salinity, and acidity [3]. This potentially means the species of coral in Costa Rica could be more resilient in the changing climate [3]. Scientists’ noticed that only after 2 years after the major coral bleaching in 2015 – 2016, the Golfo Dulce began to recover [3].

The Raising Coral team consists of Tatiana Villalobos, Dr. David Vaughan, Donna Vaughan, José Andrés Marín, and Joanie Klepas [4]. They use coral growing techniques introduced by Dr. David Vaughan, where they take small pieces of mature coral and grow them in nurseries, followed by re-transplanting these corals [3]. So far, the Raising Coral team has successfully recovered the rare coral branching corals which had almost disappeared in this region [4]. The new goal is to reintroduce over a 1000 coral of different species in Golfo Dulce [4].

This bill is called the Safeguarding Tomorrow through Ongoing Risk Mitigation (STORM) Act, and will provide local governments access to Federal Emergency Management Agency (FEMA) funds to mitigate and reduce disaster risks along the Great Lakes shorelines [21]. Currently, FEMA is unable to fund projects related to high water levels and long term shore erosion [21]. This bill hopes to protect and increase the resiliency of shoreline communities while also preserving the local economy and culture [21].

Over 95% of our oceans remain undiscovered, which means much of this blue planet remains a mystery to us [8]. The National Oceanic and Atmospheric Administration Office of Ocean Exploration and Research, focuses one deep sea exploration using remotely operated vehicles. These robotic submarines allow for scientists to test water salinity levels, temperature, dissolved oxygen, piecing together the water environment in the depths of the ocean [9]. The newest addition to the research robot submarines is the Deep Discovery, which is equipped with HD cameras [9]. These cameras enable scientists to have a clear view of the aquatic creatures with great detail while also providing the tools to collect samples from the ocean floor [9].

This video technology has enabled researchers to identify a completely new species of comb jellies off the coast of Puerto Rico [10]. This new species is called Duobrachium sparksae, and looks like a hot air balloon [9]. What made the discovery of this species unique, is that scientists relied on HD footage of the creature to identify and categorize the animal [9]. This animal was first seen in 2015, and required years of video analysis to determine the classification of the species [10]. This is the first time scientists have used video footage as their main method of identifying a new species, prior to this scientists would also collect physical samples. The video footage is so detailed, scientists can get a good look of the morphology, physiology, and behaviour of the animal [10].

The tensions between the non-Indigenous and Indigenous reaches far back into Canadian history and is linked to treaties signed in the 1700s [12]. The treaties created in the 1700s stated that Indigenous people have the right to fish, this was then re-asserted by the Canadian Government under the Marshall Decision in 1999. However, the major gap in the Marshall Decision is the usage of the term ‘moderate livelihood’, when defining how much fishing the Mi’kmaq can do [12]. Since 1999, the government has not defined what a ‘moderate livelihood’ is when it comes to the First Nations fisheries, and when Indigenous fishers attempt to assert that right they are met with lots of negative backlash [12].

The lack of definition and comprehension of treaties has led to the continuous animosity towards the First Nations people in Nova Scotia by the fishing community. While many non-Indigenous fishers frame their concerns about ‘off-season’ lobster fishing as a conservation issue, records show that Indigenous fishing operations have less than 1% of the total lobster traps [12].

Clearwater Seafood is a large offshore commercial fishery that is self managed [13]. This commercial operation uses the greatest amounts of traps that trumps small scale inshore commercial fishing and Indigenous fishing [13]. Earlier in 2020, Clearwater announced that they were selling either part or all of the Clearwater company [14]. The industry was bought in partnership by Premium Brands and a group of Mi’kmaq First Nations in a 1 billion dollar deal [15]. This now means the Mi’kmaq are owners of 50% of Clearwater Fisheries and ownership of all the target company’s fishing licenses [15]. This is a great economic opportunity for the Mi’kmaq communities involved in the purchase, and will potentially provide long term economic benefits for Indigenous communities in the East Coast [15].

Waterlution’s Mi’kmaq friends across the Atlantic region have shares that they hope to see this co-ownership bring sustainable fishing practices to this large fishing corporation and preserve the lobster fisheries for the next 7 generations.

The United Nations Declaration on Rights of Indigenous Group (UNDRIP), is a declaration that was announced in 2007. This declaration contains 46 articles which define the rights of Indigenous peoples around the globe, this includes ownership rights to cultural and ceremonial expression, identity, language, employment, health, and education [23]. During the Conservative Harper Government (2006-2015), Canada originally voted against the UNDRIP, in 2007, but later endorsed it in 2010 [23]. In 2016 Member of Parliament, Romeo Saganash, proposed a Bill C-262, which would ensure Canadian laws were in line with the United Nations Declaration on the Rights of Indigenous Peoples [24]. This bill was passed by the House of Commons but was stalled by the Senate, diverting further direction on the bill to provincial governments [23]. Since then the only province to instate any legislation around UNDRIP is the province of British Columbia, which occurred in 2019 [23].

On  December 3rd 2020, the Minister of Justice and Attorney General of Canada introduced  a new bill that would begin the process of aligning federal legislation with the UNDRIP declaration [25]. This federal bill, also known as C – 15, also calls for a 3 year action plan which describes how the government will meet declaration objectives [25]. This bill will require the Canadian government to consult and cooperate with Indigenous peoples to ensure federal laws comply with human rights standards set out by UNDRIP [26]. How this bill differs from previous proposals is the action plan which provides guidance on how to put the declaration into practice [27]. Indigenous communities are hopeful that this bill will be the positive step forward in closing the gap in quality of life between Indigenous peoples and Canadians [27]. This bill should lead to Indigenous water rights being upheld by the government. An example of a promising Indigenous partnership in water governance is the partnership between the Cowichan Tribe and the B.C. government in managing the Koksilah watershed  [28].

Within this unusual year, many of Waterlution’s Water Innovation Labs global teams have excelled in creating innovative projects to address water challenges in their specific locations. WIL Lebanon and WIL Brasil have shown great robustness through this year and were able to support young water leaders in their countries on their journey.

Each of the WIL programs had hundreds of attendees who collaborated in smaller teams to solve a water problem of their choosing. These projects are eligible for further funding which are used to develop their projects. An example of the amazing water work that was completed in 2020 was seen in 10 selected innovation teams from Brasil. What made these projects outstanding was their utilization of innovative nature based solutions to address the unique challenges found in the diverse Brasilian territories, while also incorporating strong youth leadership capacity. There are so many more water achievements that have been made by our Waterlution community and we applaud all of you.

Together, our Waterlution team celebrates the vision of young water leaders!