The Start of Making Yarn 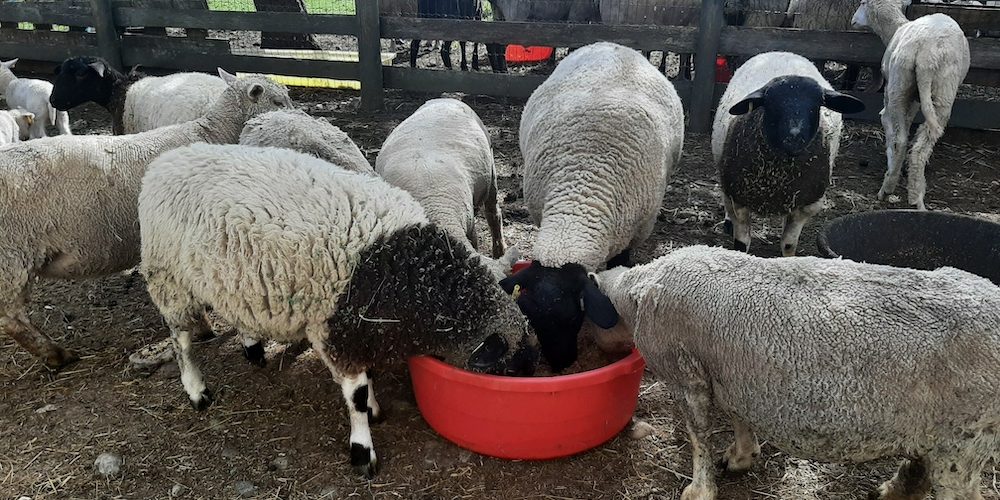 Ever wonder how people used to make clothes? Some knitted, crocheted, wove or sewed… But all these practices require yarn and they couldn’t just go to the store to buy it, so how did they make it? I’ve often found myself wondering about this over the last few years. I googled it, and pinterested some how-tos a couple of times because I thought it looked like a fun thing to try. Yes, I said FUN! Things like this are exactly why my husband (lovingly) calls me a nerd, haha. But I can’t help it, hobbies like this just call to me. I love learning new skills, especially ones that aren’t as widely practiced as they once were. So when I came across the Cautious Optimist Project, I knew I wanted to get involved. I didn’t know Danielle but her hope for the future, and desire to learn and share knowledge resonated with me. I sent in my idea of processing wool to yarn and crossed my fingers that I’d get to help carry on Danielle’s project.

I was so excited when I received my invitation to be a learning lead that I started sending emails to local sheep farms that same day. I hoped that one of them would let me watch them shear a sheep and buy the fleece. Most of the farms had already sheared their sheep and the fleeces were spoken for, but I got lucky! Lorea at Country Wool farms had a Finnsheep Ram (I’ll refer to him as Finn) that had been away for breeding and had yet to be shorn. She said I was more than welcome to come by that Saturday morning and watch Finn get sheared. Woop woop!

It was a hot May morning (false summer was in full swing) as we headed over to Country Wool farms on Saturday. We met Lorea beside the barn and sheep pens, and watched the sheep roam around as she got prepared to shear.

She layed a board on the ground to prevent the fleece from getting dirtier than it already was and tested her shears. Lorea pointed Finn out to us as her helper got in the pen to put a lead on him. Finn was stubborn but grudgingly followed her out and onto the board.

Lorea sat Finn on his rump, leaned his back against her legs and began by shearing his belly. The belly wool is sheared first because it’s generally thinner, shorter and dirtier than other parts of the fleece. The rest of the fleece is sheared in one piece starting with one of the hind legs. Lorea started with the left hind leg, then moved onto the neck area and left foreleg. She repositioned Finn fully on his back to shear his left flank. Then she sat him on his rump again and sheared his right foreleg. She lowered him onto his left side to shear his right flank and hindleg, and finished off with his back and rump. The whole process took mere minutes and Lorea made it look effortless.

Finn was promptly led back into the pen and happily found his feed waiting for him.

Lorea tossed the fleece to spread it out flat for skirting. Skirting is when any off colour or particularly dirty areas of the fleece are separated from the rest to avoid reducing the quality of the fleece as a whole. Lorea removed the dirty hind leg bits for me to wash separately and rolled the fleece up with the cut side out. This was when I first got to feel the fleece, and OH MY GOODNESS, I could not believe how soft it was.

Fleece rolled out and rolled up. Photo by Amy Sinclair.

Before we headed home, Lorea needed to feed a couple of new lambs and she let me hold one. He was so soft and cuddly, I wish I could’ve taken him home too.

We headed home and I couldn’t wait to get started! But… I didn’t actually have everything I needed to do the next step (scouring the fleece). So I put my little girl down for a nap and decided that I wanted a closer look at the fleece. I spread out a clean sheet on the ground outside and laid the fleece on it.

I picked through it removing some hay, oats, loose dirt and other vegetable matter. Once I was satisfied with having played with it, I rolled it up in the sheet like a jelly-roll and put it in the storage room.

Finn’s fleece was only a half year’s growth so it wasn’t a huge fleece. Since I’m learning a new skill I wanted some more material to play with. I mean I’d inevitably mess up somewhere or not have something work out quite right the first time around (especially because everyone seems to swear by a different method).  So I needed another fleece from somewhere else. Parry bay sheep farm was the answer! They weren’t currently shearing but they had some fleeces in storage from the winter when they shear for lambing. So we headed out to Metchosin to meet Lorraine, and pick up one more white fleece and one brown one, because how could I not get one of each?! She was so kind and had even searched through all of their stored fleeces to find me the biggest one so that I would have lots to learn with. And let me tell you, this fleece is huge!  Like it was bursting out of an industrial sized garbage bag, it was so enormous! Then GUESS what?!?! When she learned that I was going to spin it all with a drop spindle, she offered me an antique spinning wheel… AS A GIFT! Oh, to say I was excited would be an understatement. Apparently it had been sitting around for years collecting dust and she’d been trying to find someone who would use it. I can’t believe that I get to be that lucky person. After many thank yous,  we took the wheel off the frame and got it all tucked safely in our little car (I’m sure my husband was just thrilled haha but he knew it made me happy). We stopped for ice cream and then made our way home, where I giddily looked over my new, unexpected spinning wheel.

Now, as I eagerly await the days I get to scour the fleeces, I’ve been busy watching videos and reading blogs detailing the scouring process (and how to prep the fibers to spin because I’m so excited to try everything!!)

Growing up in Vancouver Amy developed a love for being outside exploring the natural world. She attended McGill University and received a Bachelor’s of Science in Environmental and Agricultural Sciences, with a specialization in plant biology. She is an aspiring plant ecologist who enjoys gardening, baking and crocheting. Currently she lives in Victoria on WSÁNEĆ land and is a stay-at-home mom of an adventurous little girl. The two of them spend the majority of their day outside watching the birds, playing in the dirt and exploring their surroundings.