Sonic Signature of a Small Lake in Late Summer 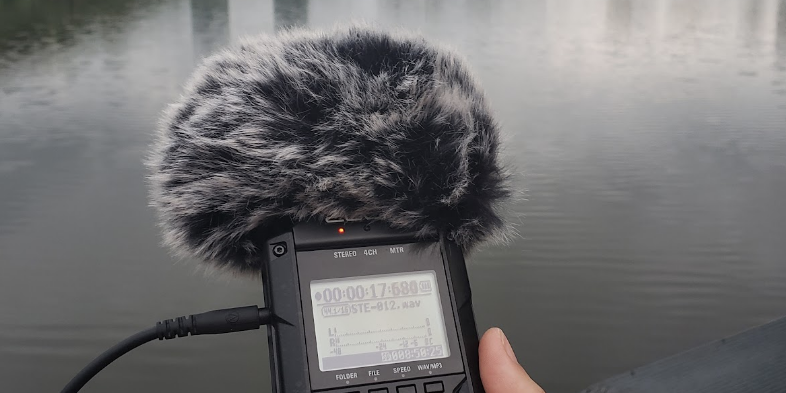 As a Learning Lead with Waterlution, Melissa is learning about wild soundscapes by capturing audio recordings and listening. Read about her first soundscape recording experience here.

My second soundscape recording and listening activity took place at Lac des Battures, a small lake located on Îles-des-Soeurs in Montréal, Quebec, on the traditional territory of the Kanien’kehá:ka (Mohawk). Lac des Battures is one of the smallest lakes in Montréal, but it is an important site both recreationally for visitors looking for an escape to nature, and ecologically for many bird species (local and migratory) and other animals.

I visited Lac des Battures in the early evening of August 29, 2021, with the hope of capturing the lake’s soundscape in late summer. I was curious as to whether I could witness the shift in animal and insect activities at dusk simply through listening. I was inspired by what Garth Paine, composer, scholar and acoustic ecologist, described as a special time for listening to the environment: “I have spent decades making field recordings in which I create a setup before dawn or dusk, then lie on the ground listening for several uninterrupted hours. These projects have taught me how the density of the air changes as the sun rises or sets, how animal behavior shifts as a result, and how all of these things are intricately linked” (Source: Using the Sounds of Nature to Monitor Environmental Change, Smithsonian Magazine).

Before setting up my field recorder, I took in the sights surrounding the lake in the last hours of sunlight. Tall vegetation grew in the riparian zones surrounding the lake. I could spot a couple Great Blue Herons standing motionless at the edge of the vegetation. I tried to spot a Least Bittern, a rare heron species that can be seen at this lake, but no luck that day. The sky was overcast and there was little wind. I was reminded that I was still largely in an urban environment when I looked at the condo towers at the opposite end of the lake.

I sat on a bench with my field recorder. I decided to just sit and listen and record for a few minutes without interruption. Here’s what I heard. I could hear chattering birds, insects, and some distinct bird calls (Great Blue Heron at 00:11, Canadian Geese in the distance at 3:10, Red-Winged Blackbird at 3:52). Although the water was calm due to the absence of wind, I quickly became aware of the presence of aquatic life evidenced by small splashes as 00:23, 1:52, 2:01, and 2:24. The most surprising sound I heard during this recording was from 1:04-1:13 when a group of birds flew overhead with a whoosh and landed in the reeds next to me.

Another recording from shortly thereafter captured something I had never heard before. After hearing the hikers go by at the start of the recording, I heard what sounded like a sneeze coming from behind me at the edge of the reeds. When I looked over, I saw a Great Blue Heron emerge from the vegetation and walk directly behind the bench I was sitting on, only a few feet away, making what sounded like a sneezing sound every few steps. You can hear it in the recording at 0:27, 0:41, 0:51, 1:09, 1:17, 2:04. Hearing this kind of animal behaviour made me concerned about the health of the bird.

After sitting and listening from the bench at the side of the water for some time, I decided to follow the path along the boardwalk through the “boisé du Domaine Saint-Paul” to see what I could hear in the wooded area adjacent to the lake. While walking along the boardwalk, I could tell that the types and qualities of the environmental soundscape were drastically different in the forest than at the lake’s edge.

I spotted some Orange Jewelweed growing along the edge of the boardwalk. This plant is an excellent example of plants that uses a ballistic mechanism to disperse its seeds. When you gently press the seed pods with your fingers, the pod explodes, and the seeds are launched into the air. Do you think I was able to capture the sound of the exploding seed pod with my field recorder? See for yourself here.

I stood in the forest and heard a strange sound that made me think of a squeaky door but may have been a bird. I have been trying to identify the bird based on its call, but it’s been a challenge! Any ornithologists out there who can help? Or perhaps it is a squirrel?

At the end of the boardwalk, I popped out again at the lake’s edge in a heavily vegetated area. I stopped to listen here and was amazed to notice how different the sounds were here than the spot with the bench where I initially captured recordings. At this spot on the lake, there was a cacophony of birds in the tall reeds. I could hear the wind blow through the vegetation at 1:04.

My experience listening and capturing field recordings at Lac des Battures on this late summer day was relaxing and memorable. I felt like I took in more of my surroundings from both listening AND observing visually than if I had just used my sense of sight. I hope to return to the lake in the fall at a similar time of day to capture field recordings and compare how the environmental soundscape differs across seasons. As Garth Paine states in the Smithsonian Magazine article, “Sound is a critical environmental signifier. […] Imagine how climate change could affect environments’ sonic signatures. Reduced plant density will change the balance between absorptive surfaces, such as leaves, and reflective surfaces such as rocks and buildings. This will increase reverberation and make sound environments more harsh. And we can capture it by making repeated sound recordings at research sites” (Source: Using the Sounds of Nature to Monitor Environmental Change, Smithsonian Magazine).

I look forward to capturing several recordings at Lac des Battures during the changing of the seasons to see if I can observe a difference in the bird, insect, and animal community and a change in the quality of the sounds and sonic signatures.

Melissa Dick lives in Montréal, QC, on the traditional territory of the Kanien’kehá:ka (Mohawk), a place which has long served as a site of meeting and exchange amongst many diverse First Nations including Algonquin-Anishinaabe, Atikamekw, and Huron-Wendat. She served on Waterlution’s Youth Advisory Board in 2018-2019 where she met and got to know Danielle Moore. Melissa is honoured to contribute to the Cautious Optimist project and to keep Danielle’s legacy alive.