Reflecting on Online Activism: Environmental Justice and the Anti-Racism Movement 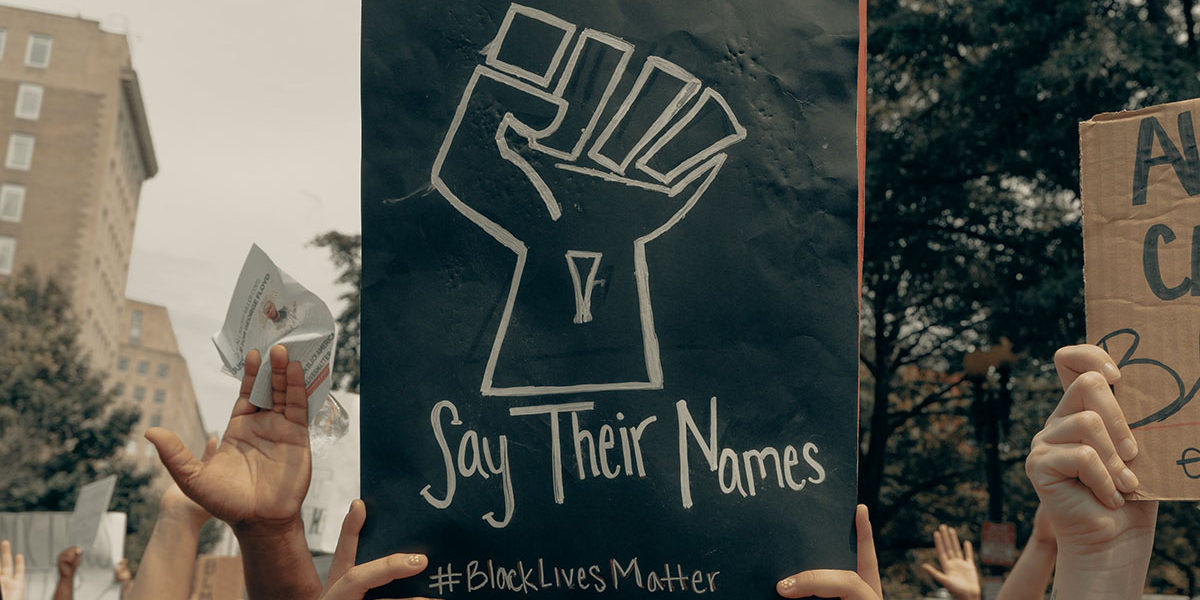 The anti-racism movement unfolding around the world and online is unprecedented. Never before has social media been used so actively to address and educate people on white privilege, colonial legacies, and the ongoing systematic racism which has continued legacies of violence and genocide in American, Canadian and Global societies. Social media has been spreading an incredible wave of awareness and has the power to share diverse voices and stories and for white folks to demonstrate allyship. But it has also led to the realization that social media can take away from the issue at hand.

The environmental movement and the anti-racism movement are separate in some ways, but also intricately linked in many others. Being an ally and working to be anti-racist, intersects directly with the fight against climate change.

Most notably, on #Blackoutuesday many people posted a black screen in support of Black Lives Matter and this movement. This left people questioning how this actually made an impact and in fact, it may have done more harm than good. Many Black activists said that these black squares were loading the #blacklivesmatter hashtags with blank posts as opposed to filling it with educational materials. It was also blocking an essential communication sphere for those organizing and protesting. Importantly, many activists are asking: if we don’t back up our social media action with real life action and education, how can we truly be rising, speaking up, and learning during this movement?

Being first a YAB volunteer and then a summer student with Waterlution, while also benefiting from white privilege in my personal and professional life and of course systematically, has made me reflect on my role as someone who cares about the environment and how this intersects with being an ally in both the climate justice and the anti-racism movement. I have learned more about environmental racism: a term used to refer to the ways in which waste, pollution and the climate crisis disproportionately impact and harm Black people, Indigenous people and other people of colour.

Dr. Benjamin Chavis coined this term in the 1980s during his research on how racial demographics are correlated with toxic waste locations. For example, the documentary There’s Something in the Water explores harmful contaminants in the water wells from an old dumpsite in a Black community just outside of Shelburne Nova Scotia, where ignored concerns led to elevated rates of cancer. Another example of this horrific impact of environmental racism is the mercury poisoning in the Grassy Narrows community where Indigenous people are dying young due to long-term mercury exposure. On the website freegrassy.net,organisers explain this “started in 1962 when an upstream paper mill began dumping 10 tonnes of mercury into Grassy Narrows’ English-Wabigoon River system.” Discrimination through land use policies and unequal enforcement put Black, Indigenous, and people of colour in harm’s way. The environmental movement and the anti-racism movement are separate in some ways, but also intricately linked in many others. Being an ally and working to be anti-racist, intersects directly with the fight against climate change.

Many activists, writers, and people are asking how can we create long-lasting and meaningful change at a moment like this? I was inspired by an article titled “Your Instagram Post is not Enough,” written by my friend Leina Gabra in Zora, a Medium publication for women of colour. As someone actively learning about this movement, this article inspired and taught me about the importance of being an activist both on and off social media. The article cites a key term called “Slacktivism” which addresses how during this age of social media, people can easily become “passive activists.” They can post something on Instagram or Facebook, yet in real life still fail to make meaningful and present change.

I wanted to learn more and see how a connection could be made between the anti-racism movement and attribute it to linkages with climate and social media activism. Leina answers these questions from her perspective of being a student of activism. She provides important insight into the role of activism in the environmental justice movement and how her stimulating article could intersect with this topic.

Sydney: What inspired/drove you to write your article?

Leina: The concept of slacktivism is one that has definitely bothered me for a while now. Whether it be racial violence, sexism or environmentalism, I have noticed that for some, activism started and ended with reposting socially conscious art pieces on their Instagram stories. George Floyd’s murder comes almost seven years after the founding of Black Lives Matter. Between then and now, countless black people have been killed at the hands of police. Although outrage on social media seemed significant for Eric Garner, Michael Brown, Tamir Rice, Sandra Bland, and many more for a few days, after a flurry of initial anti-racist ‘activism’ on social media, those who are privileged enough to forget and move on, seemed to do just that.

I wrote my article to encourage people who were genuinely outraged by George Floyd’s murder to take action rather than just express their sadness and anger online and then move on.  My desire was to convince people to stop and reflect on their own behaviors and how they may perpetuate or enable racism and empty forms of online ‘activism’.

A more useful way social media can be used for activism is to amplify different perspectives, share tangible ways to help and important educational resources. In order for activism to be truly meaningful, it must come from a real desire to help, not from a place of guilt or moral high ground.

Sydney: How do you think people can combine meaningful activism and social media activism together? Why is this important?

Leina: I made sure to stress the point in my article that social media has been one of the most important tools for organizing and mobilizing social movements in this decade. Social media breaks down the barriers of geography that 20th century activists may have faced. It is also so much easier for anyone with an Instagram account to learn about a movement or an issue in the world simply from seeing someone’s post or story. But I do believe that this has also created another issue, over saturation.

Over saturation of any form of content can make someone numb to it, even if the discussion or material within is painful, important and complex. This is why I believe it is important to take breaks from social media and take time to reflect on what you are doing that is meaningful before posting. Spreading awareness is very important, but sometimes it is futile; if a 20-something liberal person posts on their Instagram story that racism is bad, it gets presented to their followers of the same demographic who already agree with them. How much meaningful effect is it having?

A more useful way social media can be used for activism is to amplify different perspectives, share tangible ways to help and important educational resources. In order for activism to be truly meaningful, it must come from a real desire to help, not from a place of guilt or moral high ground. I would suggest that in addition to using social media constructively, people should find actionable and sustainable ways to support causes they care about in their everyday lives without necessarily posting about it all the time.

Sydney: What do you see as the interlinkages between the anti-racism movement and the climate justice movement?

Activism is leading through example and ensuring that the statements you make and share are also actively practiced in your personal life. There are many small ways to change your lifestyle, mindset, and internalized belief systems to become not necessarily an activist, but a better person. As I said before, I believe that it is a lifelong process that is meaningful as long as it is genuine and sustained.

Sydney: How can we then apply this notion of being activists on and off the screen to the environmental movement and fight for climate justice as well as anti-racism? Where do you think the two overlap and where do they not?

Leina: I think that the main message in my article was to take some time to reflect on the causes you care about – or claim to care about – and assess the ways in which you can make small, but meaningful changes to show meaningful support for your cause. I also will stress that this is not a one-time decision, but a lifelong process of discovering new things, educating yourself, and contributing in ways that are sustainable for you. There are small and large ways that individuals can reduce their carbon footprint, so it is important to find the ones that work for you and make them habits rather than occasional efforts. I also believe that people (myself included) need to educate themselves much, much more on climate change and environmental activism.

Environmental activism requires more nuance to make it accessible for people of all socioeconomic levels. However, it is up to every individual, regardless of race or gender, to be an environmental activist in any capacity they can. I always try to emphasize how personal activism is. It is unreasonable to expect every person in the world to know everything about every form of activism and to excel at it all the time. Activism is leading through example and ensuring that the statements you make and share are also actively practiced in your personal life. There are many small ways to change your lifestyle, mindset, and internalized belief systems to become not necessarily an activist, but a better person. As I said before, I believe that it is a lifelong process that is meaningful as long as it is genuine and sustained.

As Leina has pointed out it is so important to incorporate activism into our everyday lives and become meaningful allies to fight for change. The environmental movement and anti-racism movement are interlinked in many ways and both require education and systematic change. Thank you Leina for sharing your insights and wisdom into this topic, and for being an inspiring voice through your articles, I have learned so much!

The Vegetables of our Labour 
July 6, 2022
"On our first Sunday foray, we went to a very sque

📢 CALL FOR EMERGING INDIGENOUS ARTISTS❗ This

Join our Youth Advisory Board to support the UNITY