The Water Calls Me by Sienna at St. Thomas Aquinas Catholic Virtual School 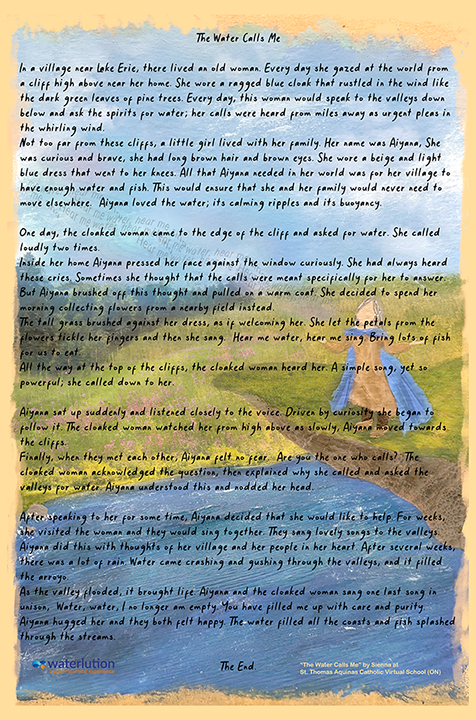 The Water Calls Me

In a village near Lake Erie, there lived an old woman. Every day she gazed at the world from a cliff high above near her home. She wore a ragged blue cloak that rustled in the wind like the dark green leaves of pine trees. Every day, this woman would speak to the valleys down below and ask the spirits for water; her calls were heard from miles away as urgent pleas in the whirling wind.

Not too far from these cliffs, a little girl lived with her family. Her name was Aiyana, She was curious and brave, she had long brown hair and brown eyes. She wore a beige and light blue dress that went to her knees. All that Aiyana needed in her world was for her village to have enough water and fish. This would ensure that she and her family would never need to move elsewhere.  Aiyana loved the water; its calming ripples and its buoyancy.

One day, the cloaked woman came to the edge of the cliff and asked for water. She called loudly two times.

Inside her home Aiyana pressed her face against the window curiously. She had always heard these cries. Sometimes she thought that the calls were meant specifically for her to answer. But Aiyana brushed off this thought and pulled on a warm coat. She decided to spend her morning collecting flowers from a nearby field instead.

The tall grass brushed against her dress, as if welcoming her. She let the petals from the flowers tickle her fingers and then she sang. “Hear me water, hear me sing. Bring lots of fish for us to eat.”

All the way at the top of the cliffs, the cloaked woman heard her. A simple song, yet so powerful; she called down to her.

Aiyana sat up suddenly and listened closely to the voice. Driven by curiosity she began to follow it. The cloaked woman watched her from high above as slowly, Aiyana moved towards the cliffs.

Finally, when they met each other, Aiyana felt no fear. “Are you the one who calls?” The cloaked woman acknowledged the question, then explained why she called and asked the valleys for water. Aiyana understood this and nodded her head.

After speaking to her for some time, Aiyana decided that she would like to help. For weeks, she visited the woman and they would sing together. They sang lovely songs to the valleys. Aiyana did this with thoughts of her village and her people in her heart. After several weeks, there was a lot of rain. Water came crashing and gushing through the valleys, and it filled the arroyo.

As the valley flooded, it brought life. Aiyana and the cloaked woman sang one last song in unison, “Water, water, I no longer am empty. You have filled me up with care and purity.” Aiyana hugged her and they both felt happy. The water filled all the coasts and fish splashed through the streams.