Learning to Preserve Fish for the Climate Apocalypse 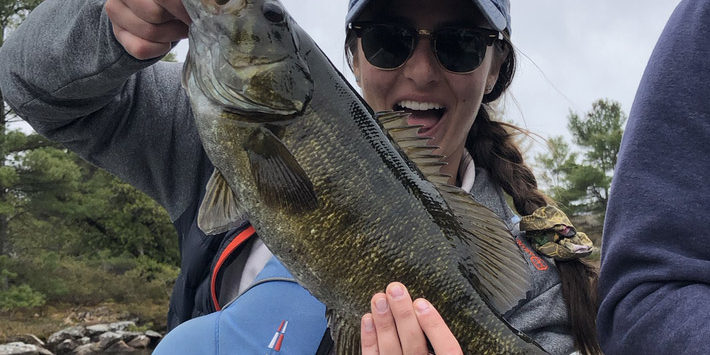 “Want to go fishing?” is the phrase that starts my summer every year. My brother Kieran is an avid fisherman, and a very skilled one at that. Since he was 3 and caught his first bass off the edge of the rocks in Georgian Bay, fishing has stuck. Since I can remember, every summer Kier has not missed a day on the water. Not to mention, our annual fishing competition that really brings out my competitive side – always with me losing and Kier catching the most and always the biggest fish. My dad taught my brother and I to fish at a very young age, always as a teaching tool to learn about the underwater environment and as a fun sport, but never for survival. When talking about the Cautious Optimist blog, I was so inspired by what everyone had learned about living off the land and building the necessary skills to survive the climate apocalypse. I realized how lucky I was to already have learned such an important skill at such a young age, one which could allow me to have a source of food in a time of crisis.

When learning skills to survive, you have to be flexible in your actions given the weather conditions or other environmental changes.

Last year Rosheen wrote a great blog on how to fish, so this summer I thought of adding a part 2 to the series. I wanted to learn how to filet and cook the fish, but most importantly to preserve the fish once caught. I realized that each year when my family and I do an annual fish fry, we cook the fish on the spot. But what if we needed to keep this fish as a source of food for days or even weeks without a refrigerator or freezer?

Without being stored in proper conditions, fish is one of the most dangerous foods when it is raw. Through learning more about fish preservation, I learned that fish is one of the foods most susceptible to tissue decomposition, spoilage and rancidity. Pathogens and bacteria can easily grow and harm people if the fish is not preserved properly. Therefore, when I asked my brother Kier to help me with this task, we knew we could not take it on lightly. We would have to practice and do our research before we could master this skill. That is why we decided to embark on a mission to try and learn about fish preservation and see if we could carry out the task.

At first, we were going to try to learn multiple different methods – pickling, salting, drying and smoking. After doing more research and talking to people, we realized that due to our current weather, the heat and humidity would make for poor conditions for drying the fish. The pickling process and some other processes are also very long and complicated. I wanted to try something you could do during an apocalypse with few ingredients. Additionally, there was a fire ban during the time I was learning this skill, so for safety we could not learn to smoke the fish or cook it over an open fire. When learning skills to survive, you have to be flexible in your actions given the weather conditions or other environmental changes. So, we decided to learn how to dry salt the fish and Kier and I set off on our fishing adventure.

It was a sunny day when we cast our lines in the water. I asked Kier what his tips were for catching fish. He said that persistence is key – you need to try different lures and fish in as many places as possible. Many people have their special lure or special spot, but really the key is to find what works for you to catch fish and just keep fishing. We caught two small mouth bass, which is a very common fish species in Georgian Bay, as well as a delicious one. We kept them in the live well until we arrived home, and immediately filleted the fish so it was as fresh as possible for our preservation.

The first step of filleting a fish is to find a sharp knife and cutting board. Then put the knife under the side fin of the fish and cut at a 45-degree angle under the gill, towards the head. Take the knife out and find the dorsal fin. Put the knife in and find the top of the ribcage, then cut down the back of the fish, starting from the head and moving towards the tail. Move the knife back to the place where you cut the gill and turn it sideways. Then flesh side up, move the knife sideways along the body of the fish cutting the first fillet. You can then cut the skin off and repeat the same on the other side. Once that was done, we rinsed the fillets in the water and patted them dry as best we could.

Kier taught me that you must hold the fish strong with your hands because it is very slippery and harder to cut than you think. That’s why it is also important to have a strong and sharp knife. Another goal of mine for next time is to learn how to harvest and use different parts of the fish other than just the fillet meat.

Now it was time to try dry salting the fish, a method I had been researching about. It is very simple and requires only a large bag of salt (preferably coarse sea salt) and a bin or another type of container to put the fish in. Pour the salt on the bottom of the container and then lay the fillets over top. Cover the top of the fillets in more salt and put something flat on top of the fish. Most people say to use one-third of the fish’s weight in salt to cover it. Then leave the fish for 7 to 10 days. We stored it outside in the shade to try and keep it out of direct sun. The salt draws the water out of the fish meat which makes it an inhospitable environment for bacterial microorganisms to grow. Afterwards the fish tastes salty, but there many recipes that use this type of preserved fish and turn it into a delicacy. For example, traditional Italian Baccala, which is dried salted cod, can be used in many Italian recipes.

One thing that struck me was the time and care it took to go through the process of preserving fish. It made me appreciate how lucky I am to easily have access to food. I have a refrigerator and freezer in my home to preserve food for days on end, but this uses energy and electricity. If the climate apocalypse limits access to these things, I felt more confident in knowing how I could preserve an important food supply with limited resources. I also enjoyed learning this skill because I felt more confident and connected to my ability to use things around me and on the land to access food with less energy and resources.

In the meantime, Kier and I cooked the other fish fillets. We used our favourite Fish Crisp, but another family recipe is to batter the fish in flour, butter, and lemon. We battered the fish and put it in a pan with oil, cooking it until it was golden on either side and flaky white in the middle. I really enjoyed this part of the process and felt extremely connected to my food. The fish tasted incredible. Part of it was because it was so fresh, but also because of the satisfaction that comes with catching and cooking your own meal.

10 days later, we opened the container to see the salted fish. It looked dry with salt crystals all around and only smelled slightly fishy, which I took as a great sign. A few practical considerations I learned as I went was first that the smell of fish attracts animals. We made sure to put a rock on the container and place it in a location that was out of reach to bears, foxes, or other animals looking for a nighttime snack. Additionally, it was important to find a shaded and cool place to keep the fish as it was spending its time in the salt, or else the hot sun and humid air could exacerbate the risk of growing bacteria. This salted fish can last up to 12 months if stored in a cool, dry place. We can now boil and cook this fish when needed.

Thank you Danielle for inspiring me to learn this new skill. I feel so accomplished and more confident in my ability to live with the resources I have at my disposal for survival as well as sustainability. I learned so much, and am excited to continue learning.