Learning the Language of a River 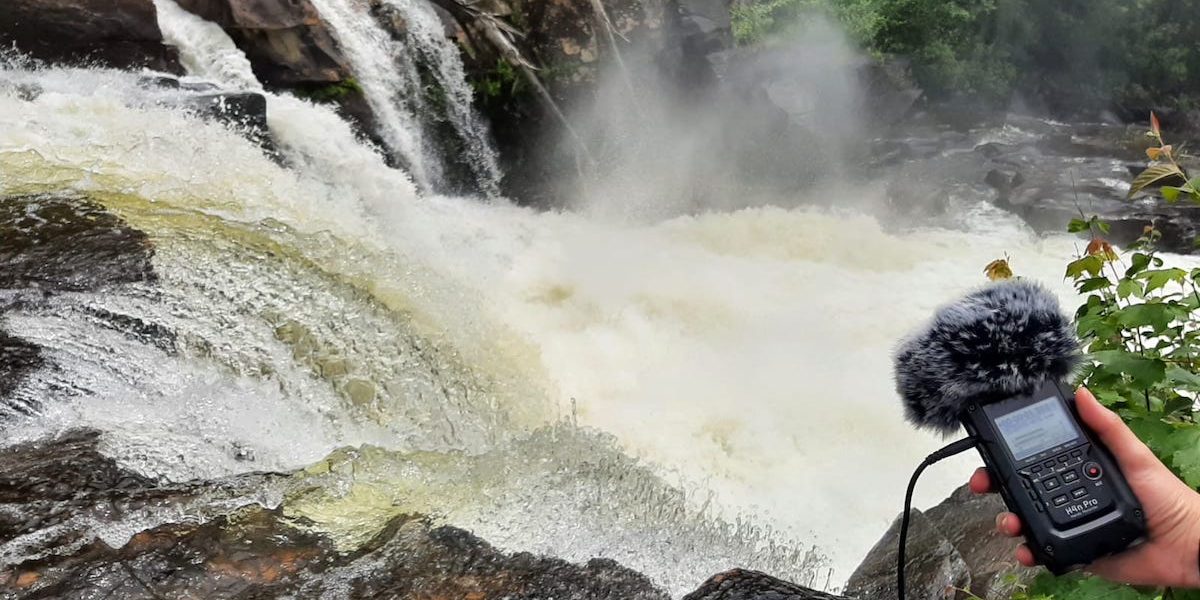 As a Learning Lead with Waterlution, Melissa is learning about wild soundscapes by capturing audio recordings and listening.

In framing my thinking around my intention to learn about wild soundscapes by capturing audio recordings and listening as a Learning Lead for the Cautious Optimist project with Waterlution, I came upon the episode “Listening for a Better World” by Dr. Mike Edwards on the podcast, Sound Matters. He states, “Learning to listen for the benefit of nature is the single most important thing we can do if we wish to address the crises we face as a species.” He explains that listening is the ultimate source of connection, and that connection is key to face the many challenges in our world today. I thought a lot about his questions: “How many of us actually listen?” and “What if we could learn the language of wild soundscapes?”

On a recent camping trip to the Portneuf Regional Park, I decided to practice listening to wild soundscapes and see what I could learn. This park is located between Trois-Rivières and Québec City on the traditional territory of the Wendake-Nionwentsïo. I had camped here before, so I was familiar with the area in terms of where the hiking trails are, where the bridges are to cross the river, and where the beach is. But I hadn’t consciously listened to the different natural environments in the area. I was familiar with the various landscapes but hadn’t previously considered what the soundscapes may be like.

The camping area borders the Rivière Noire which flows from Lac Long. The river runs through narrow, rocky terrain and contains some impressive rapids and waterfalls in some areas. While camping here the previous time, the water level was so that one may have described the river as “gentle” or maybe even “babbling.” However, as soon as I arrived at the site for my recent camping trip, I didn’t even have to try to hear the river – it was “roaring” and “thunderous”! Recent rains had increased the water levels and the Rivière Noire was a totally different sight and sound to behold.

I was nervous the day I decided to walk around with my field recorder and see what I could learn about the Rivière Noire’s soundscape. What if the sound of the powerful river is all my recorder could pick up? As I hiked along the trail that ran parallel to the river, I stopped at different spots to see what I could hear.

A flat, rocky spot used as a swimming spot last time I visited was now completely submerged. The water level reached high on the bank and lapped over mosses and small plants. I stopped here for a moment to see if I could hear the difference between water lapping on rock versus water lapping on moss.

I walked across a wooden bridge and noticed a small stream flowing underfoot. The sound of this stream was muted due to a buffer caused by the tall plants growing in the area. From there, I walked on a rocky outcropping that stretched into the middle of the river. Small rapids flowed along the sides of the outcropping and created little pools. Check out how many different sounds I was able to capture in this 2-minute recording, in spots just 10 feet apart from one another!

I also noticed the human activities in the vicinity: the sound of cars driving on the gravel road, other hikers on the trail. I even became keenly aware of the lower-lying spots in the trail by tuning into the sound of squishy mud as I walked by.

Further downstream, I found the mighty Marcotte Falls. As I walked closer to the falls, I found the river produced the strongest sound I could find that day. I was mesmerized as I sat by the waterfall and took in the sights and the sounds. Over time, I became accustomed to the roaring sound and was able to tune into less obvious parts of the waterfall – the constant bubbly upwelling at the very base of the falls, the frothy texture on the surface of the rapids downstream, the patterns of the lapping water against the rocks, the rhythmic frequency of the spray, and how the wind carried the mist into the trees.

Taking the time to discover the soundscapes of the Rivière Noire allowed me to “engage with the stories of these natural processes,” as Dr. Mike Edwards put it in the podcast episode. The high water level truly transformed the sounds surrounding the different river environments, which I was able to discover through careful listening.

“Engage with the stories of these natural processes,”

Out of curiosity, I looked up the data from the hydrometric station on the Rivière Noire to see if the conditions I witnessed during my recent camping trip were typical of a high water event. Indeed, the flow rate of the river at that time was at a peak. In the end, I didn’t have to look at hydrometric data to know it – I could tell by how the river sounded.

Next time you are by a river, lake, stream, or even a puddle on the street, I encourage you to pause for 5 minutes and to listen to the language of the water. Is the water level high? Is it low? What is the water’s story telling you today? Follow Waterlution on social media to read reflections from other Learning Leads as part of the Cautious Optimist blog series.

Melissa Dick lives in Montréal, QC, on the traditional territory of the Kanien’kehá:ka (Mohawk), a place which has long served as a site of meeting and exchange amongst many diverse First Nations including Algonquin-Anishinaabe, Atikamekw, and Huron-Wendat. She served on Waterlution’s Youth Advisory Board in 2018-2019 where she met and got to know Danielle Moore. Melissa is honoured to contribute to the Cautious Optimist project and to keep Danielle’s legacy alive.