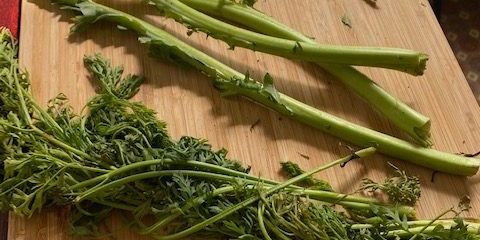 Every week I fill up my green compost box, put it in an even bigger compost bin, and kick it the curb without giving it too much thought. It’s green right? But maybe not. Every year, Canadians waste almost 2.2 million tonnes of edible food, literally throwing tens of billions of dollars worth of valuable resources into the garbage. Not wasting food seems like a preliminary step in surviving the climate apocalypse.

A great friend and previous roommate of mine, who never wasted a morsel of anything edible, also inspired me to explore this topic. We affectionately call her “Nan” for her wise words and cute grandma-like habits. She was always reminding us to put on sunscreen, bring a jacket and would rock out in long, colourful shawls and ponchos. When we were living with Nan in university, we used to chuckle when she would save those last two bites of her meal and put them back in the fridge. The next day though, when we all got home from a late class she would pull out that nugget of chicken or 2 ounces of leftover broccoli casserole. She would eat it with a friendly smirk at the kitchen table as the rest of us ruffled through our cupboards like racoons trying to find anything edible to snack on.

Nan is always saving food scraps, and so of course I asked her where to start when it comes to learning about reducing food waste. Upon her suggestion, I began following the “Zero Waste Chef” on social media. I was a devoted scroller of the feed, but I didn’t really take it to heart until I began growing my own garden.

For full disclosure, I am not the best gardener. Green thumb or not though,  I am sure it rings true for a lot of us with vegetable gardens that your relationship with food changes when that little seed you planted sprouts into a something wonderful to eat.  But this is especially true for bad to mediocre gardeners like myself.  Every vegetable I manage to keep alive becomes my pride and joy. I turn into Smeagle from Lord of the Rings, as I water my single, precious bean and at dawn chase away curious starlings in my bare feet and boxers.

So much time and effort that goes into growing food even at a small scale, it feels wrong to throw any part of it out. You raised them from little seeds for goodness sakes and they deserve better than the bottom of the green bin. So, with Nan and the Zero Waste Chef’s advice, I began exploring how to cut down the perfectly edible food I was tossing and make the most of my meagre vegetable yield.

In this 3 part blog series, I explore recipes, composting methods and put my backyard chickens to work as I test out the different ways to cut down food waste in my kitchen.

For my recipes, I used scraps I would normally throw into the compost- kale stems, carrot tops and radish leaves. Overall, I tried a few recipes and these two were my favourite, both for the ease of throwing them together but also for the taste!

However, those that know me know that I will eat just about anything (yea, I’m one of those the it-is-only-expired-if-it-does-not-smell-bad kind of people.) So for a more balanced opinion on my culinary skills, I also forced my picky-eater partner to weigh on my choices. How picky you ask? Well, he hasn’t trusted my cooking since I made him eat a green olive 4 years ago. Luckily, I managed to bring him around for the purposes of this blog. ☺

This pesto is awesome! I used on pasta, spread it on bread, and used it as the base for a salad dressing. It is so versatile, super tasty and easy to make. I can’t believe I was throwing these pieces of vegetable goodness in the compost!

This one was easy peasy and very good! The recipe can be served as a side, but I put mine on a spinach salad for a little spicy crunch and bite to the dish and it tasted great!…. well to me at least.

It didn’t quite pass the picky-eater test. My partner’s comment was “Did you dumpster dive for this?” Partly because that sounds like something I might do, but also, he is scarred from an experience he had a conference in Amsterdam where they served reclaimed food. (But if you ask me we should be doing that at every conference!)

Stay tuned for my next post, as I take the scraps I didn’t make a meal with walk you through owning backyard chickens- the perfect composters for what you can’t use in a recipe.