Gardening My Way Through a List of Learning Goals 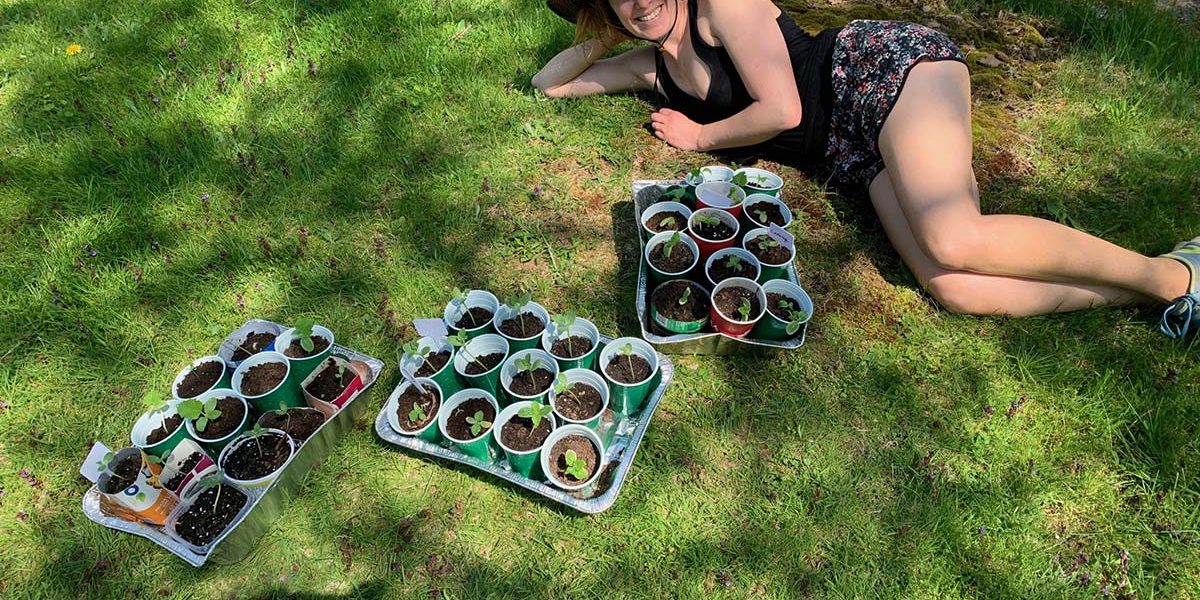 About a year ago, when the Youth Advisory Board decided to carry forward the Cautious Optimist Project in memory of the wonderful Danielle Moore, my heart was warmed. The fact that the project was envisioned, designed and launched by Danielle, along with how deeply it resonated with her co-volunteers (their excitement shimmered through the computer screen), made this a very special legacy project for our team. Thinking back to last spring, I was excited to learn a new skill (or two!) using life as a learning lab, building new (yet…old) skills. Many volunteers signed up for our monthly blogging slots (which was awesome!), but I must say I am very excited it’s finally my turn to contribute! The skills I wanted to learn the most over the past few months were gardening, pickling/canning, woodworking and mushroom identification.

I’m very lucky to live close to family. I have the precious gift of space (land) to garden AND I am neighbours with my EPIC dad who is amazing at anything and everything which has to do with using tools. He also comes with all of the woodworking tools you could ever need or imagine.

Where I used to live in BC, I had no space for gardening and no space (or tools) for woodworking. I did have many opportunities to explore the Coastal Temperate Rainforest and learned about a few easy to identify, edible wild mushrooms. I am currently exploring and learning about Eastern Canada mushrooms…can you guess what my next Cautious Optimist blog is going to be about?

Getting good soil and manure fertilizer was essential for starting my seedlings, especially in Nova Scotia. Our soils are naturally low in alkalinity (meaning the soil can’t adjust its pH very well). We are also still feeling the impact of acid raid in our soils and waterways because NS lacks this natural pH buffer. We had tried planting a few plants in soil from our yard, but their leaves looked burnt from the harsh soil. We adjusted the pH with baking soda, which saved the plants, but they still suffered from this early trauma.

I like to think of myself as a life-long learner. I would describe myself as curious, optimistic and fast-paced! There were (and still are) so many new skills I wanted to learn. HOW COULD I PICK JUST ONE???? I think internally, the implementor in me SAID just go for it and do three at once — and Optimistic Olivia responded with “YEAH!”.

I started in early April (a bit late) jumping onto the pandemic-life beginner-gardener bandwagon. And I jumped hard…I was ready to plant any seed I could get my hands on and I might have been in a bit over my head. Luckily my partner, Alex, has had some experience with gardening and showed me how to sow the seeds in a warm place with a damp paper towel until they crack open. He also reminded me of a lot of basic items I would need in the coming days (seedling trays, good soil and a watering can to name a few). I was already getting ahead of myself – you can’t sow seeds if you don’t have the materials to plant them and if they don’t get planted when they crack, they go to waste. I told myself to slow down and reflected on the last time I tried to garden (about 10 years ago and it was a complete failure!). I was determined to do better this time!

Getting good soil and manure fertilizer was essential for starting my seedlings, especially in Nova Scotia. Our soils are naturally low in alkalinity (meaning the soil can’t adjust its pH very well). We are also still feeling the impact of acid raid in our soils and waterways because NS lacks this natural pH buffer. We had tried planting a few plants in soil from our yard, but their leaves looked burnt from the harsh soil. We adjusted the pH with baking soda, which saved the plants, but they still suffered from this early trauma.

I waited impatiently for the seeds to sprout indoors and after about 6 days, some started, first the tomatoes, cucumber, and corn. The last to sprout was the asparagus which popped up two weeks after planting. While I was growing the seedlings inside, I overwatered some and their soil became mouldy. This helped me understand that when I began to plant them outside, I really needed to pay attention to the weather. On sunny days, my plants would need water every day, but if it was overcast, they wouldn’t need to be watered as often.

He also mentioned that the climate change impact on crops in our area is intense with the frosty nights lasting into late May now (instead of late April). The wet springs over-saturate the soils, creating muck and the dry late-summer weather challenges a gardener’s commitment to watering. He suggested a few plots on our property where my grandparents used to garden, and also strongly suggested we think of garden plots as an investment – he recommended raised garden beds to gain more control over the soil moisture content.

As the weeks went on, I began to think my plants weren’t growing fast enough. I called my Uncle Andrew who also lives nearby and gardens. He let me know that I should be taking the plants outside for a few hours on sunny days, but on the first few days, only for a few hours. I had to help them adjust to full-sun so they could grow and so they could adjust to the outdoor environment before it was time to be planted and fully exposed to the elements. Oh boy, another moment of feeling in over my head.

Getting my head spinning, even more, Andrew asked me where I would plant, saying that soils that haven’t been used as a garden before don’t provide enough nutrients for plants. He also mentioned that the climate change impact on crops in our area is intense with the frosty nights lasting into late May now (instead of late April). The wet springs over-saturate the soils, creating muck and the dry late-summer weather challenges a gardener’s commitment to watering. He suggested a few plots on our property where my grandparents used to garden, and also strongly suggested we think of garden plots as an investment – he recommended raised garden beds to gain more control over the soil moisture content. So much learning!

I had A LOT of seedlings and needed to really figure out my planting plots. My partner Alex pulled the grass off an old garden in our yard and started building a raised garden bed out of small fallen trees. My dad helped rototill this area and another garden bed (the one my grandparents used) that was already exposed. The raised bed needed more store-bought soil added before we could plant there and we didn’t realize how much it would take to fill it. We’re at 6+ bags now and it’s not even half full!

Guided by the packages the seeds came in, I began planting my seedlings. I was super surprised by how much space a lot of the plants need, especially tomatoes (60cm!!). I planted the first round of seedlings (and some seeds that didn’t need to be started inside) in my grandparent’s old garden. My fingers were crossed for all of the corn, carrots, spinach, lettuce, beets, tomatoes, broccoli, basil, cucumbers, watermelon and cantaloupe in the garden. (I told you, I started a lot of seedlings!)

I realized the one raised bed and my grandparent’s garden were not going to be enough. There are still many cucumbers, watermelon and tomatoes to plant. I had already planted some cauliflower, broccoli and tomatoes in large pots, but I still had more. I didn’t think the tomatoes would do good in the raised bed we were building because it’s shaded during part of the day and tomatoes prefer full sun. This was where project #2 began!

I went to my dad’s yard to try and find some free wood. I found a pile of old decking among the thorns and after some much needed bush pruning, I got the wood and was determined to make some planters. A bunch of pieces were about one meter long, so I decided that would be the length of the sides and bottom. I made the bottom and sides with three pieces of thick wood and measured how long the short ends would need to be to attach the box together.

I asked my dad to teach me how to use his chop saw. He did and went inside while I cut one piece of wood. He came back out and promptly said, he better do it because I am clumsy. I didn’t even try to argue! This ended up being more of a watch-and-learn project. My dad also used his tabletop saw to cut small pieces for each corner to strongly fasten the planter together. After all the pieces were cut, I was determined to nail it together myself. But about halfway through, I hit my finger which resulted in several blood blisters. I decided to try the drill instead, but couldn’t get it to work. Alex ended up fastening the planter together with the drill. It turns out I was not strong enough to use the drill at awkward angles. As I said, this was more of a watch-and-learn project. Finally, we had enough space for ALMOST all the tomatoes (I plan to give the rest away to some friends once I nurture them a little more.).

By the end of the day on Friday, everything was planted. The next few months are all about WATER. I’ll be watching the weather forecast and keeping the soil moist whenever natural rainfall is not on the horizon (the plants will need to be watered every morning). Stay tuned to hear about my pickling and canning adventures. If all of my seedlings mature, I will have lots of veggies in need of preservation.

Gardening is rejuvenating, and growing your own food instills a great sense of accomplishment.

Danielle wanted us to build skills that could help us survive the Climate Apocalypse and she wanted us to do this by learning from our friends, family and community. While starting my garden, I’ve felt inspired by Danielle and more connected to my late grandparents.

This experience has not just allowed me to grow as a gardener, it also allowed me to dip my toes into woodworking and has made me feel good about myself, especially planting into the outdoor soil. When I first moved back here, just before sowing my seeds, I was reconnected with some coffee mugs that belonged to my grandmother.

“Oh how sweet and pleasant is the fruits of a tree which a man hath  planted and ordered with his own hand, to gather it and freely bestow it among kindred and friends – R. Austin”

Gardening is rejuvenating, and growing your own food instills a great sense of accomplishment. Planting in my grandparents garden, on family land, I believe my grandmother would be proud of me for gardening, but I chuckle knowing that if she were here, I’m sure she would have a lot of critical feedback on not only my planting skills, but my whole approach and timeline during this gardening season.

Thank you to Alex for being my co-gardener and to my dad, Laird, for the labour woodworking/rototilling and to my Uncle Andrew for sharing his knowledge and passing on some gardening tips from my “Ninny” (grandmother) and Grand-dad.

Contact Olivia if you’d like to write a blog about a new life skill as part of the Cautious Optimist Project, olivia.allen@waterlution.org

As part of setting the water priorities in the Ara