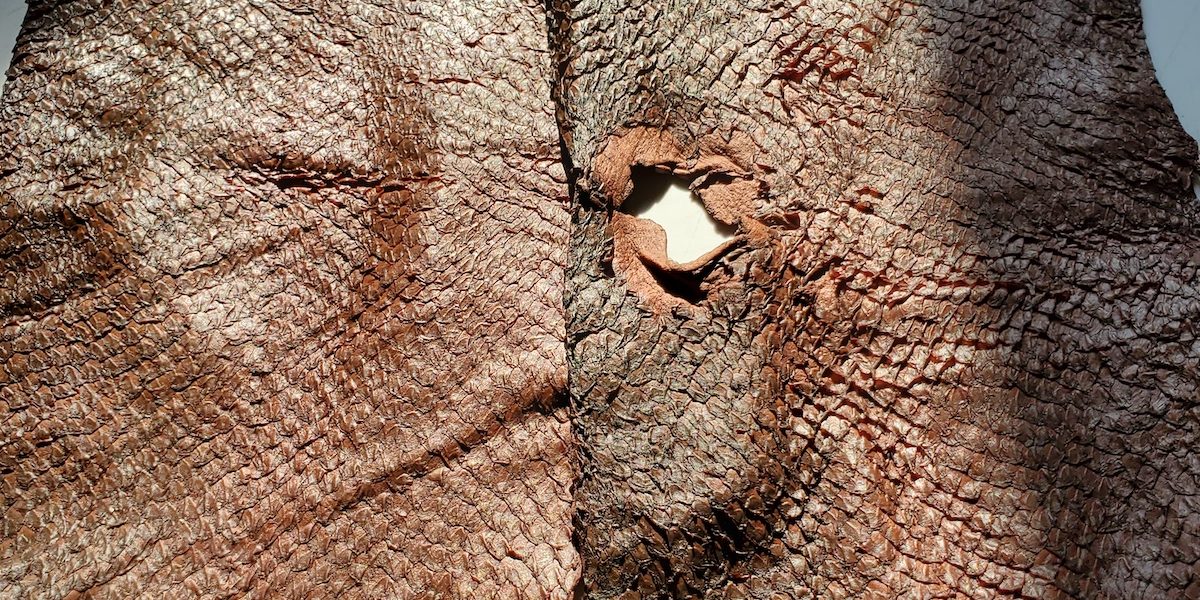 For the Cautious Optimist blog, I chose Fish Skin Leather tanning. Noticing a resurgence of traditional practices from my fellow Indigenous people across Turtle Island, I wanted to share that spiritual and emotional connection to traditional methods our ancestors may have used. The challenge imposed here being: a traditional practice that allows me to feel spiritually and emotionally connected vs modernly, I don’t particularly care for fishing or fish in general.

To even begin the process of tanning fish skin, you need the skin from the fish; which means fishing. As mentioned, I have no ounce of interest in fish, for these very particular reasons: as its main use being for food, and to me they taste terrible so there’s no reason for me to even try fishing. Is that me just being plain-ole picky? Quite so!

The other reason being: there’s x amount of them that come in various vast sizes in the most undiscovered area of the earth; water. There may, or may not be a hint of fear in the latter.

Tossing aside personal interest and fear, I wanted to be able to share this skill with my daughter, who may someday use this skill for her future.

Usually, my partner has the interest and skill to fish, not to mention the boat; but with his work schedule at its busiest, there was no wiggle room for me to ask for a fish to magically appear. Which began the task of how to actually fish.

Having no access(at first) to a boat, I needed to consult my excellent social media sleuthing techniques. Browsing ancient facebook group posts which in turn helped me narrow shoreline locations by the type of fish. If I was going to put all this hard work into fishing, I might as well bring dinner home, as well. That meant the least fishy tasting fish that I knew of: walleye.

With fishing rods already kicking around the house, I moved to lures. When I did try to find lures, I didn’t think there would be that much of a variety of them; it was very overwhelming and surprisingly expensive. Having a tackle box in the shed, which more than likely had hooks to stick bait on, my simple thought process concluded that: hooks plus minnows, equals fish/fishing. In hindsight, I think it would be beneficial to re-learn this part.

With all my equipment in tow, I asked my fish savvy nephew if he could take me out to a few spots. Our first run was more of a hilarious learning experience which involved a lot of wind and a small paddle boat for two. With my older sister joining us, we almost sank and couldn’t get back to shore. I didn’t catch any fish, but my nephew caught (and released) a small bass. On the same day, we attempted a smaller lake and brought single-person kayaks so we could all fish together! This also resulted in no fish for me, but a small sunfish for my nephew!

My third attempt involved shoreline fishing with my canine companion. We stopped at the bait and tackle shop on our way out, where the owner kindly helped me find the proper sized minnows to match the fish I was attempting to catch. There were a few hiccups throughout the afternoon experience. I forgot my lures in the car, after we had hiked all the way to the lake, so we had to go back. I lost most of the minnows with each cast, and ALMOST caught a fish!

By now, I was slowly running out of time and feeling quite discouraged, but carried on with the fourth and final attempt on Lake Superior.

My mom knew I was in need of a fish, so she connected us with a distant family. Although a smoother and luxurious experience, with a stable boat, copious amounts of bait, a skillful guide, family and a school of 62 fish, I still wasn’t able to catch a thing. Ultimately, I was able to achieve my catch thanks to Costco and it’s abundant salmon fillets!

In conclusion, fishing is no joke and to put it bluntly I still don’t enjoy it. Despite that, the skills and knowledge I learned throughout the experience are invaluable. It has brought me closer to family and our culture, and I’ve gained new insight into the use of fish and how much we actually waste.

With fish in tow, I’m ready for the next step in blogging; tanning the fish skin itself.

The Vegetables of our Labour 
July 6, 2022
Karen and Laurence are meeting up on a sunny Montr

As part of the recent #WILAtlantic2022, attendees

Canoe time was one of many joyful memories made du