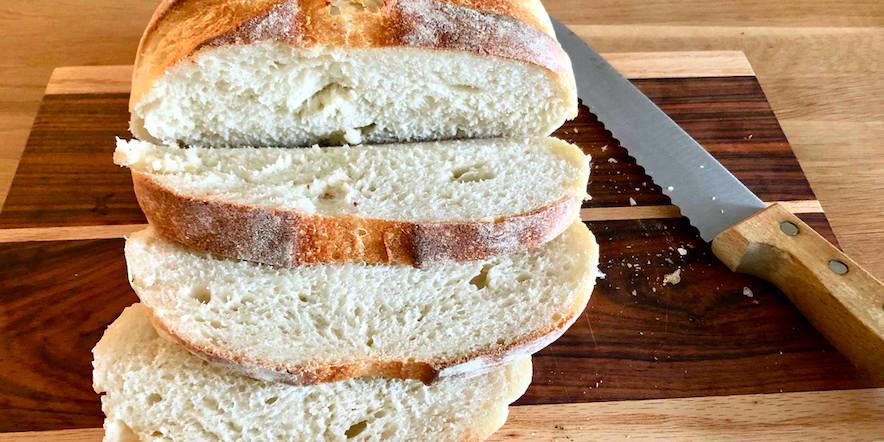 September has gone by in a blur. It’s been an exciting and jam-packed month for me, full of new beginnings, new friends, early mornings and lots of coffee. Although it sometimes feels like the relaxed pace of summer was just yesterday, the crisp air of the mornings and the comfort foods creeping onto my plate are tell-tale signs that fall is officially here.

To some, fall is synonymous with pumpkin spiced lattes—a phenomenon that I can’t really say I fully comprehend (gasp). Personally, my favourite fall indulgence is a warm bowl of homemade soup with a side of fresh bread.

“I have never been much of a baker. But how hard could it be? I already had everything I needed to get started: flour, water, and a mason jar.”

After a summer of growing an abundant harvest of veggies from our backyard garden, I was inspired to continue learning how to sustainably sustain myself and localize my diet as the seasons change. Knowing that I would inevitably get to making some of my favourite soups soon, I decided to take on the challenge of making sourdough bread, a great accompaniment to any soup. My past experiences trying to find bread that was local, affordable, nutritious and not wrapped in unnecessary plastic packaging were largely unsuccessful, and would typically end in me splurging on a $12 loaf of bakery bread that never lasted longer than a day or two.

Making sourdough bread adds a layer of complexity as it doesn’t use store-bought yeast to rise like other breads do. Instead, it is made with a sourdough starter – a fermented mixture of flour and water that is full of natural, wild yeast and bacteria. After much deliberating and combing through baking blogs, I decided to take on the challenge of making my own starter from scratch.

Truth be told, I have never been much of a baker. But how hard could it be? I already had everything I needed to get started: flour, water, and a mason jar.

“Feeding it became a ritual of sorts, and something about the inherent slowness of its growth prompted me to slow down too.”

You have to ‘feed’ the starter daily while it’s growing by discarding half of it and then adding in fresh flour and water. Most of the sourdough blogs I read “highly recommended” using a kitchen scale to weigh equal parts flour and water, as no two flours are created equal, and often have different densities. Despite this encouragement, I was hesitant to purchase yet another kitchen appliance, so I opted to go rogue and try without, approximating the water-to-flour ratios as best as I could. I also didn’t like throwing out half of the starter at each feeding, so I experimented with making sourdough pancakes on weekends using the extra starter, which I would highly recommend – they were delicious.

Growing a sourdough starter is like having a pet: you feed it every day, keep it warm and sheltered, and sometimes, it can stink (literally). But, with a little love, patience and some regular feeding, the smell goes away and it returns to a happy and healthy state. The goal is to get it to form bubbles and double in size.

“Throughout this blog process, I often thought about Danielle… in her memory, I wanted to find a way to make this less of a solitary project, and something that I can share with others in my life.”

The sourdough blog I was following said that the starter would be ready in 5-7 days, but little did I know, my starter had a plan of its own. On day 6, I decided to test its progress. To see if it was ready, I dropped a bit of my starter into a glass of water, hoping it would float to the top. Much to my disappointment, it plopped down to the bottom like a deflating balloon. I returned to feeding it daily, hoping that it would eventually fill with bubbles and double in size.

It took a full two weeks for my starter to consistently double in size and pass the float test. As the days went on, I noticed myself moving more slowly and intentionally. Feeding it became a ritual of sorts, and something about the inherent slowness of its growth prompted me to slow down too.

To celebrate my starter, I baked a loaf of sourdough bread. This was the ultimate test of success—it turned out even better than I hoped.

Throughout this blog process, I often thought about Danielle and her passion for lifelong learning and connecting with her community. In her memory, I wanted to find a way to make this less of a solitary project, and something that I can share with others in my life. I have hope that my new sourdough starter will provide many loaves of fresh bread well into my future, which I intend to share openly and generously with those around me.

Also, to spread the sourdough love, if you’re reading this and you’d like to try baking your own sourdough, reach out—I’d love to share my starter with you! I can attest that it makes delicious bread, and can guarantee that it’s been carefully crafted with love, patience and a healthy dose of Cautious Optimism.

Quick tips for growing your own sourdough starter:

Growing up spending summers on a pristine lake in Ontario, Emma has always felt connected to and in awe of the natural world.  After earning her B’Comm from Queen’s University in Kingston, Ontario, the draw of the ocean, glaciers and mountains of the West Coast led her to BC. She now calls Vancouver home, on the traditional territories of the Musqueam, Squamish and Tsleil-Waututh First Nations. Emma works in management consulting, and spends her free time exploring the backcountry of BC, by way of foot or boat through the summer, and by skis through the winter.

Emma finds joy in connecting with others and actively seeks new perspectives. In 2017, she spent 7 months travelling the world, exploring and experiencing different cultures from the bustling cities of India to remote mountain villages of Nepal. She looks forward to continuing this journey through the YAB by connecting with indigenous cultures at home.