Do Worms Crawl Upwards or Downwards? 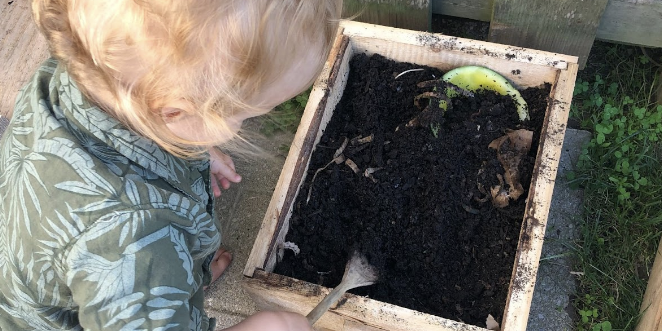 Most learning experiences would not feel whole and fulfilling without some side steps and mistakes. It is these challenges that really get my brain processing the experience! In my last post, I detailed that we had migrated our worms from the first bin and into the second bin. Using what I thought was my common sense, I decided that it would be easier for our worms to travel downwards through the bins to reach their new food sources in fresh bedding. Before I detail how the worms migrate, picture them in your mind for a moment- how do you envision worms travelling?

I was wrong in that worms can indeed migrate effectively up through the bins without getting stuck. I suppose they crawl along the inside walls. Wouldn’t it be neat to have a tiny camera with night vision inside the bins to watch this migration?! Anyway, as I mentioned in my last post, Ned from Red Spruce Woodworks (the crafter of our bins) has been a continued source of knowledge and gentle advice. He suggested that by migrating the worms upwards (a new bin with fresh bedding and food is stacked on top of the old one) we would benefit from the digested liquid from the worm castings seeping into the bin below for added nutrients. Any liquid or compost tea that leaks through and collected in the tray can be used in the garden too. Luckily our worms have remained happily in their middle apartment so far, however, if we continue to migrate downwards then the worms may think more food is beneath them and crawl out of the holes in the bottom of the bin. We clearly do not want that- we like our worms and hope they stay with us for a long time! Lesson learned: move worms upwards.

Worms need to migrate between bins just as they would migrate through the earth both in search of new food sources and for fresher pastures as they leave behind their castings. We are choosing to migrate our worms approximately once a month right now since they are eating quickly. If they slow down in the cooler weather or once we transition them to our garage or basement then we may re-evaluate. This timeline is quite on the early side. Many other vermihut owners seem to suggest a longer timeline for harvesting (see for example, https://www.cathyscomposters.com/instructions.htm, https://compost.css.cornell.edu/worms/basics.html).

I am constantly considering child rearing philosophies as a fairly new first time parent. One simple quote that I read (and may eventually find in an art piece for our bathroom wall) which stuck with me when planning our activities is, “[a]nd at the end of the day, your feet should be dirty, your hair messy and your eyes sparkling.” (Shanti). Our tiny human loves exploring, making messes and getting dirty. He is at peace when digging in our garden, on the hiking trails, in his Grandparents’ backyards, in holes on the sidewalk… really anywhere that he can dig a stick in! He of course then loved the mixing of the fresh bedding for our worms. We did not use a particular ratio of ingredients, but just went by texture. We were looking to create a soft feeling without too many rough parts but an ability to hold moisture which is especially important during these hot summer months. We used a mixture of plain earth, coconut coir, crushed egg shells and shredded paper then added some water and mixed it up until it felt damp.

In our research we learned that it is easiest to encourage worms to migrate by offering them some sweet incentives like their favourite foods. I guess I have this in common with our worms. Our red wrigglers really enjoy melons so we made sure that we had a watermelon on hand that week which worked out well since my husband and son also adore it. Once we had eaten our fill, we simply placed it in the new bin and covered it with fresh bedding. Our worms travelled quickly and by the next day, most of them had already moved down to feast on the new treat. It has been interesting to watch how quickly the worms consume the rind and to see the small pieces that get left behind. After consuming a cantaloupe rind, for example, all that is left over are some small pieces which resemble lace and after consuming a kiwi, all which is left is the peduncle.

I think the most effective way to judge the contentedness of our worms is to see if they are trying to escape or if they are happy in their home. I am happy to report that our bins are full of worms and there are no apparent escapees. Moreover, the worms have procreated en masse and we have many proud parent worms. There seems to be a constant production of tiny white eggs and wormlets (evidence coming soon in our videoblog). We actually have such a thriving clew of worms that we have transferred around half of our worms to our second vermihut!

Our next step in this adventure will be using the castings in our garden- wahoo! We are planning on a little experiment to share with you by planting the same species of plants in identical planters, adding castings to one and regular soil to the other (keeping all other elements such as sunlight, water etc. as similar as possible) and then documenting the growth.

Wishing you well until then,