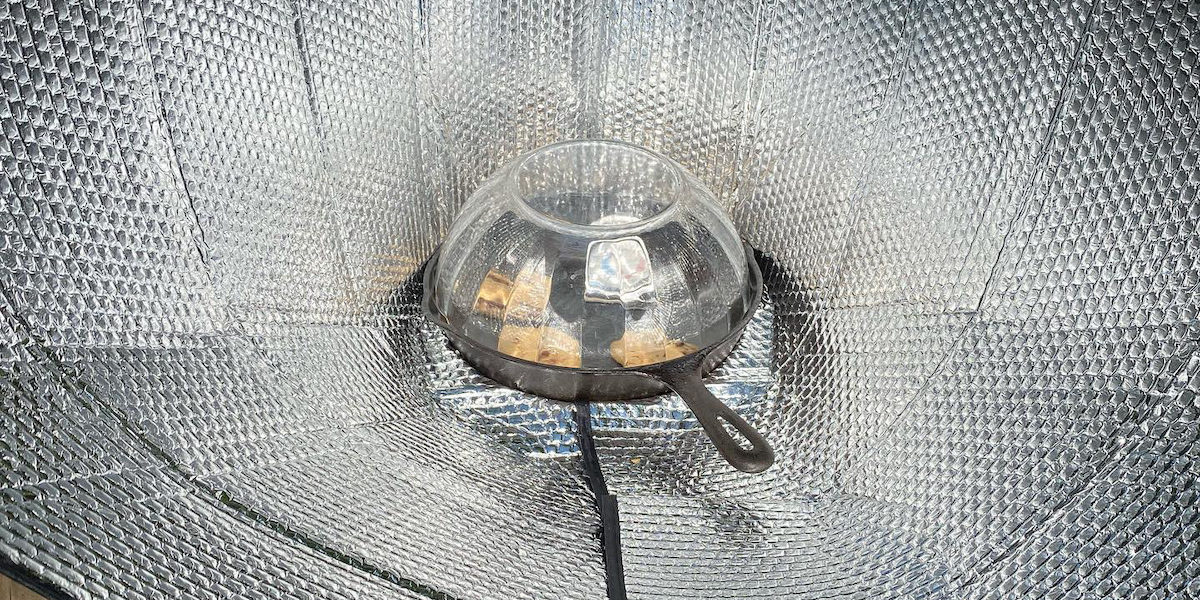 It began with an ice storm. The power was out everywhere. At first, I was secretly pleased. A short power outage is kind of fun, like camping in your own house. It’s a great excuse to let go of your lofty to-do list, pull out some candles and hunker down with some board games. However, as the hours turn into days, it becomes worrisome, and I began to fully realize my dependence on energy sources that I know very little about and have zero control over. I am fascinated by renewable energy and have grand visions of generating my energy through the power of DIY. But electricity is a little scary and kind of confusing with its volts, watts and kilowatt-hours; I need to start a little simpler. Luckily most renewable energy sources are beneficial even without converting them to electricity. The sun, for example, doesn’t need a solar panel to heat something. Many of us know how easy it is to turn a car into an oven by simply parking it in the sun. I will begin this endeavour by attempting to cook with the sun.

There are two main types of solar oven, the box solar cooker and the parabolic solar cooker. The box solar cooker is essentially an insulated box with a transparent top and one or more reflectors to collect and redirect more of the sun’s rays into the box, causing the interior to heat up.

The parabolic solar cooker is a curved reflective surface, which concentrates the rays onto the sides and bottom of a pot or kettle. I decided to attempt to make a prototype version of each.

I found this excellent idea for a Parabolic solar cooker at http://solarcooking.org/plans/windshield-cooker.htm. I love how cheap, simple and portable it is, so I made one of my own with some slight alterations based on what I had. I used adhesive velcro rather than sew on, which worked great. I did not use a cake cooling rack nor a plastic bag but instead placed a cast iron pan directly on the funnel and nestled so nicely into the shape of the bucket underneath. Over this, I put a dome-shaped glass bowl.

How did it do?

I was so impressed at how quickly this simple contraption can heat up. Even with some cloud interference, it only took 20 minutes for the interior to reach 250F. I made cookies and then fried a couple of eggs. Everything tasted great!  The whole unit was easy to move and swivel to keep up with the sun. It’s a good thing because you really do have to keep on top of the swiveling. Without much insulation to keep the heat in, the temperature would drop quickly when the sun shifted. I want to try with some different pots and kettles to see what other meals I can make. All in all, this cooker is cheap, straightforward to make, compact, portable and surprisingly effective.

There are so many different plans and ideas online for a box-type solar oven. It was a little overwhelming to know how to begin. Eventually, I would like to make a sturdier version of a box solar cooker, but I wanted one that was low cost and made use of the materials I had available for this first attempt. This way, I can try some ideas and see how they work before settling on a design for something more permanent. So I rummaged and found materials that could work, pulled together some different design ideas and came up with this.

Here’s how I made it:

Step 1: Cut a hole in the top of the large box that was the exact size of the smaller box.

Step 2: Slide the smaller box into the hole and tape it securely into place

Step 4: Make the inside of the small box reflective. I used the reflective insulating cardboard from a meal kit box, but aluminum foil would do. Some makers prefer to have a black interior to their solar oven rather than reflective. There are differing opinions on what works better.

Step 6: Cut four trapezoids out of cardboard and make the small parallel side of each the same width as one of the picture frame sides.

Step 7: Cover trapezoid cardboard with a mylar blanket or aluminum foil. I used glue to attach the mylar.

Step 8: Tape trapezoid pieces together and tape the whole thing to the picture frame.

Step 9: Prop the oven up at an angle to catch the sun.

Step 10: Position a small rack inside the oven to support cooking pans at a proper angle.

How did it work?

My attempts to test this one were foiled time and again by rain and then, surprisingly, by haze caused by forest fires. I was beginning to understand why solar cookers were not yet trending in Ontario. But eventually, the sun reappeared, and I was able to test it. Initial assessment, this design is finicky. It’s front-heavy, tricky to prop up and trickier to move with the sun. But once it was in the proper position, it heated up like a champ. It was a little slower than the parabolic cooker (25 minutes to get to 250F), but it kept its temperature a bit better when the sun went into the clouds. It’s essentially like a slow cooker. You put your food in and walk away for a couple of hours, coming back every half hour or so to correct the angle. I popped on a pot of rice and went about my day; 3 hours later and it was done. The possibilities are nearly endless.

Tips and Resources for Solar Cooking: