All you can Learn in a Weekend about Fungi 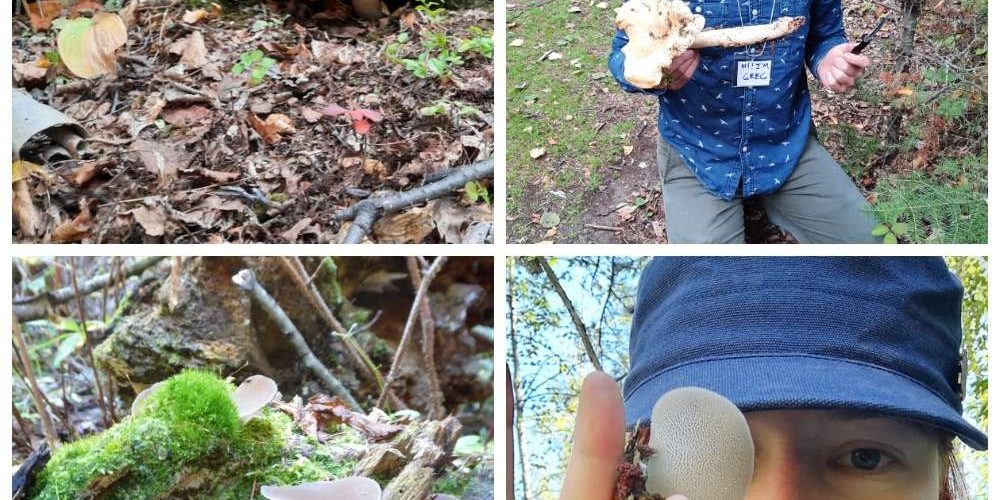 Hi there! It’s been a while! I thought I’d build up the suspense about The Great Alberta Mushroom Foray and revel in my memories of it for longer.

My experience with my partner:

The places we saw were beautiful. The first was off a gravel road, and we just parked on the side and then scrambled into the thick forest. It was awkward to navigate, which is part of the fun. It makes me feel like a nimble deer (or at least that’s the goal; yoga helps me become more graceful but hopping around a forest with fallen logs is something else).

Our second foray was at Churchill Provincial Park. Provincial Parks are a no-foraging zone in general; you can’t even pick flowers for your mum. We were given a license to go ahead, thanks to the AMS. Churchill is an absolutely beautiful park that I encourage you to explore. It feels like you’re on the west coast as you get closer to the lake, with its misty, lush forest, sandy beach, and the pelican island.

On our first Sunday foray, we went to a very squelchy area. The forest was sparse and the more we walked in, the squelcher it got. There were a lot of mosquitoes here, and, more importantly, a lot of awesome mushrooms.

Next, we went back to Churchill. We couldn’t resist a second look at this place, and it was on a trail closer to the lake. This was our best foray, in my opinion.

While we spent most of our time on the field by choice, there were some fantastic lectures. Here is some of what we learned:

Top right: Same mushroom as top-left: Greg is 6’1”. He is not a small man. Look at this mushroom in proportion to him and just think about that for a second. Then think about the courage it took him to pull that out of a mysterious hole in the ground. It kind of makes you shiver, right? I got a video of this by the way 😉

Bottom left: Folks at the event were very excited about this find. And so were we! This cat’s tongue fungus, Pseudohydnum gelatinosum, is a fairly rare one to see. It feels like jelly and wobbles so much when you poke it!

Bottom right: Honey mushrooms being chopped. Is there anything better with mushrooms than butter? Yes, there is. Butter, cream, garlic, and thyme.)

Fortunately, inky caps and their kin, genus Coprinellus, are a pretty distinctive variety of mushroom. They are edible but you need to watch it. They contain a compound that, when consumed within even five days or more of drinking alcohol, can make you really sick. People used to use this compound, coprine (note how close this is to the genus name), as a “cure” for alcoholism. Blech!

Top left: Identified mushrooms were dried in mesh trays to be prepared for the lab where their gene sequences would be recorded.

Top right: There is so much beauty involved in identifying mushrooms. You can make art out of these spore prints!

Bottom: An assortment of Amanitas. This is a genus of mushroom containing the famous Amanita muscaria, also known as fly agaric, the classic red toadstool mushroom with white spots that you see in fairytales. If eaten, you will have a very disturbing hallucinogenic drug trip. Not recommended. This genus also has Amanita virosa, known as death angel or destroying angel, which, as I’m sure you can gather from the name, is lethal. While some mushrooms in this genus are choice edibles, you need to know how to tell the difference. In short, don’t mess with Amanitas until you know what tricks are required to distinguish them.)

All mushrooms, great and small:

Top left: This is some kind of earthstar, genus Geastrum, a beautiful and strange variety of mushroom. When my partner first came across it, he was mystified and wondered what it was. It certainly smelled like a mushroom, but it was very dry. Our instinct to bring it back to the conference was the right call.

Middle left: Laccaria purpureo-badia, common name auburn Laccaria. I am so proud of this one. Greg was really good at spotting the mushrooms while I picked them. When we got back, I identified it properly (after some research), and it was one that the society didn’t have in their record. I felt like such a teacher’s pet when Martin Osis said “good job!” Isn’t it beautiful?

Middle right: Shelf mushrooms like this can be seen in all kinds of forests. Identification can be helped by noting the type of tree host. Look at how many needles they collect. You just don’t see that with store-bought mushrooms – all the dirt and debris that end up on these fruiting bodies. Bottom: a mushroom this small can be hard to identify, as it is likely very young. Pick mushrooms when they are in their most “adult” stage but before their best-before date to identify properly.

Polypores, unlike the kinds of gilled mushrooms we are used to seeing, are covered with many (poly) tiny pores on their undersides. They often feel smooth to the touch, as long as they aren’t too dry, but there are billions of billions of spores in there, comparable to the number of stars in the universe.

Top left: These look like they could be a form of red/pink Russula, of which there are many, but you’d need to see if the stem breaks like chalk to be more certain. Martin Osis told us that the best way to distinguish between them is to take spore prints. You can also snap the stalks and see what colour they bruise after an hour or so.

Top right: What a cutie. A beautiful gill-pattern too. The gills are merging with the underside of the cap in this one; the term for this is decurrent gills.

Middle left: this bright jiggly jelly fungus is a variety of witch’s butter. There are at least a couple that look similar, and it’s important to note what it is growing on and what colour it is. Is it more yellow or orange?

Middle right: These mushrooms are past their best-before date. You can tell by how dark they are and there is evidence of rot. I recall they also smelled very strongly, reminding me of button mushrooms that are a bit of a gamble to eat. Avoid, even if it’s an edible. Bottom: This mushroom reminds me of a fine English woman’s hat. She’s probably a snob and goes to horse races a lot and secretly bets on them, and she always wins. That’s why she stays so rich. It sort of looks like an unfurled inky cap but I somehow feel that isn’t right. The way it is unfurling is a bit unusual.

That’s it for now. Next up will be my first foray(s) of this year!