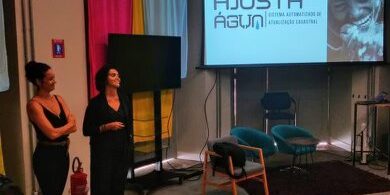 Currently in Brazil, there are about 35 million people without access to safe water and about 100 million without access to a sewage collection service. These statistics vary greatly depending on if you live in a rural community or an urban one.

Co-founders Mariana Nahas and Marina Schuh are working towards creating a more accessible and sustainable management of water in their country.

This idea is based on a cutting-edge methodology which identifies recurring water consumption patterns and characteristics based on real estate units who are utilizing these services. Relevant statistical process are created and inconsistencies are then identified using this data.

This intuitive technology has reduced up to 35% of costs in the commercial registering of water and sewage concessionaires, as well as reduced field surveys by up to 90%.

Their journey began in 2016, Mariana was doing field work to promote social engagement of vulnerable families and connect them to formal systems of water and sanitation. Later on, she did more groundwork within a larger residential area. It was here Mariana noticed the inequity in paid for water services.

“I could perceive that in these 50,000 buildings that in theory would be buildings not connected to the network actually 33% of them were connected but they didn’t receive the full bill for the services that they were in fact consuming,” said Mariana.

Mariana noticed the flaws within the utilities registration system which resulted in bills not being generated for people who were benefitting from services. Of these people, majority of them did have the social and financial conditions to pay for these services, they only weren’t receiving the bills to do so.

Mariana sought to address this issue by “bringing together various data sources including images about data and water consumption that would permit us to identify with a good substantial statistic which buildings were committing frauds and where there were irregularities.”

Collecting this data was very labour intensive and considering the inefficiency of the current system, Mariana devoted herself to creating a more intelligent registration system. With this goal in mind, Mariana attended WIL Brazil, and it was there after meeting Marina that their plans began to take shape.

“I decided I have to join together what I do and what my country needs. So that’s when I started to give more attention to and direct my professional path to sanitation” said Marina on why she came to the decision to go into this work.

Marina comes from a biology background and has a lot of experiencing working in the realm of environmental management, specifically within water systems. By participating in a hackathon held by her city she got to know Waterlution and also attended the World Water Forum.

“Through this (and the) hackathon I realized that my affinity of working with data would be a good way for me to get to start working with sanitation.”

With Marina’s skills in data, new leaps were made in Ajusta Água and with the help of WIL Brazil their technology was developed, and their business was born.

“It (WIL Brazil) brought me all this support and it also brought me relationships and potential clients. So, it brought me what I needed to my transform a good idea, a good methodology into a business, it was vital for me,” said Mariana.

Marina reflected on the unique nature of innovation in WIL Brazil, and how it fostered unexpected connections and dynamics.

“I’ve never seen a whole bunch of engineers building collaboratively a sculpture of an imaginary water creature, I was like where else would I find this – only here!”

In this creative environment Marina and Mariana picked the name of their business, perfected their methodology, set out goals for themselves and envisioned changes they’d like to see in the world of water and sanitation management.

Working in a heavily male dominated space has presented unique challenges for the two entrepreneurs. These spaces may be at times un-welcome to women and often result in them being silenced or made uncomfortable by the lack of diversity. These sentiments are unfortunately echoed across borders by women who are conducting business in homogenous fields.

Marina describes a particular result of this inequity which manifests when trying to create lasting business relationships.

“Social spheres that I’m inserted into are very different than those that (male business partners) he’s inserted into and so yes we can have a good professional relationship and be respected technically but nurturing and cultivating that relationship sometimes proves difficult and challenging.”

Marina, although finding it easier to cultivate these relationships with male business partners, highlights another issue while working in these spaces. She alludes to a culture of female rivalry which men create during instances of simple constructive criticism between female colleagues.

“This is something that I’ve felt more than once and in many times in these predominantly male environments I stopped making comments about other women even in a professional or technical capacity.”

This fear of being stereotyped by male counterparts at work may lead to women being silenced when they have genuine criticisms, and unable to participate in these spaces to the same degree.

Despite these hurdles, Mariana and Marina cultivated amazing business skills and embarked on their journey to create more universal access to clean water and sanitation management in Brazil. Going forward they hope others breaking into these fields can employ these skills that guided their own work.

“You have to speak your truth.” Said Mariana while reflecting on advice she has given her own team. “Know how to say no, when it is to say no and even if you’re in a meeting with somebody or having an encounter with somebody who has much more power than you, you still also have to maintain your authenticity.”

Perhaps these skills have specific significance for women, but they hope that all can learn from their experience, independent from gender. Both Mariana and Marina hope for a future when such conversations like these can be retired, and the work can be the focus.

“I think it’s about love. I think we have to maintain this love, not just love for the cause, but between people.” Says Marina.

Marina ends our conversation with a moving recollection of a quote she had read in that day’s paper which summarizes her hopes for the future.

“Today I read a really good quote ‘I would like to speak less of men and women, and speak more of citizens’.”

Tune into Waterlution’s blog for more stories on amazing innovations in the field of water sustainability.

SJ Rasheed (she/her), is a recent journalism graduate from Carleton University, Ottawa and now resides on the coast of BC, where she grew up. She is interested in working in the intersection of environmental and Indigenous justice and hope to do this activism through her writing and participating in community engagement opportunities.